We walked on a different path near Fish Trap Creek. It was early and we met few other people. I like this boardwalk and although the swampy area has little water now once we get rain it will be even more interesting to walk there.  I should remember to take my binoculars  next time. 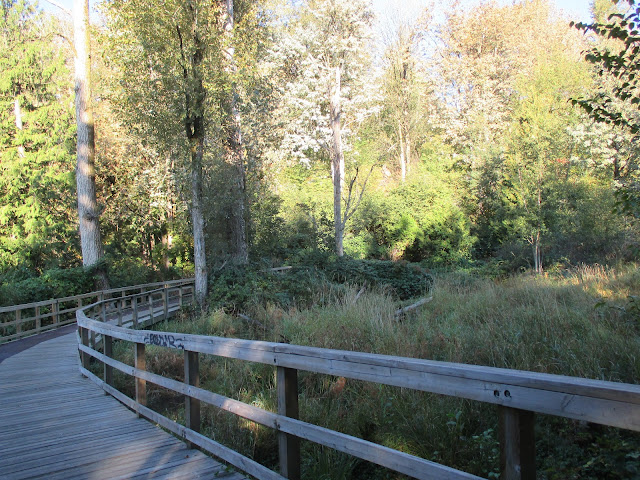 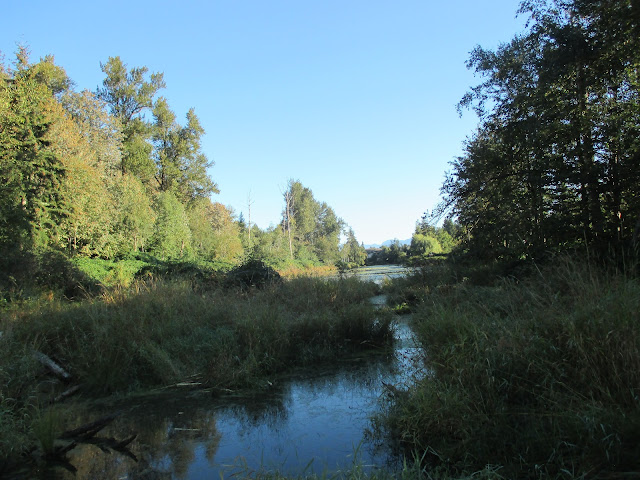 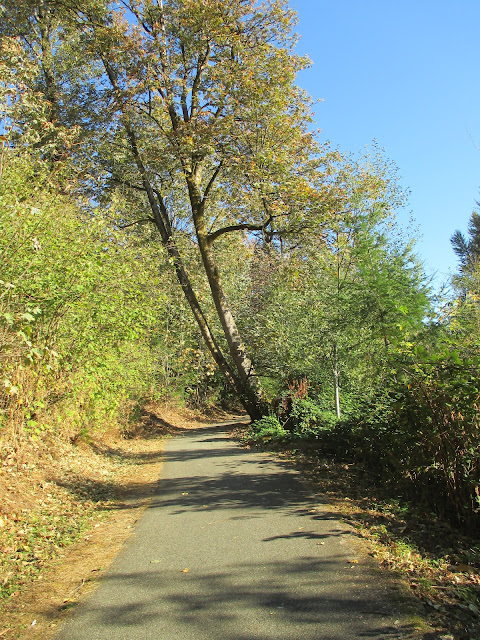 In the afternoon daughter Sheila came for Dominoes and of course had to see the kittens. 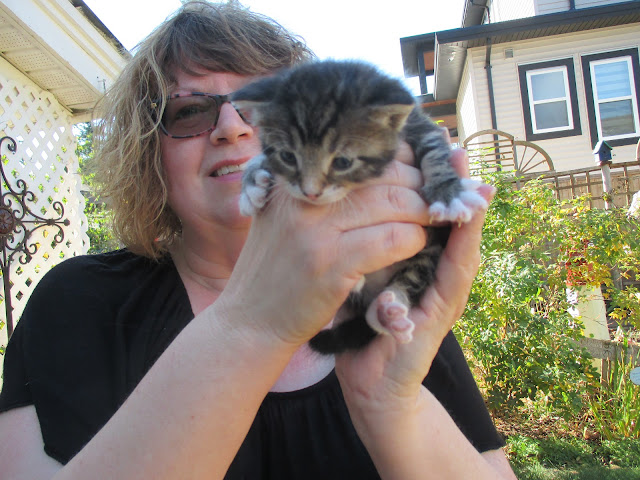 It's hard to believe September is almost over.  Our weather continues to be very warm and sunny.
Zinnias and Rudbeckias are still providing colour. The Black-eyed Susans are done but I'll leave the seed heads for now for the birds.

Thanks for visiting,  GM

I took many pictures of the kittens but most of them didn't turn out well. This one gives you an idea what they look like ( they're 3 weeks old now).  I'm sure as they get bigger I'll get better photos. 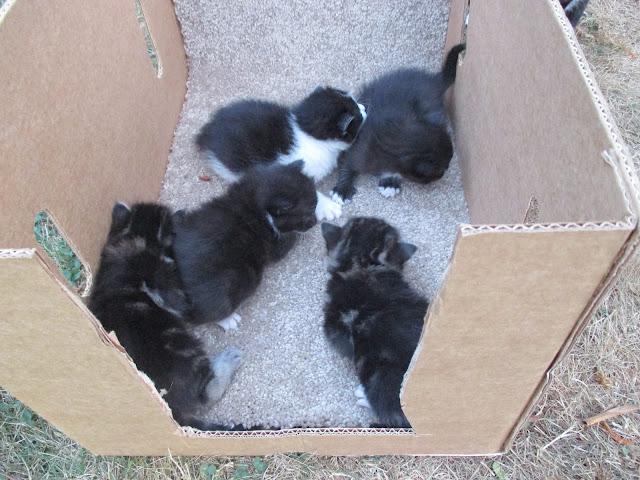 The grands and I went out for one last peek at the kittens last night and on the way they noticed this little bee that found a place to sleep in my one and only sunflower. 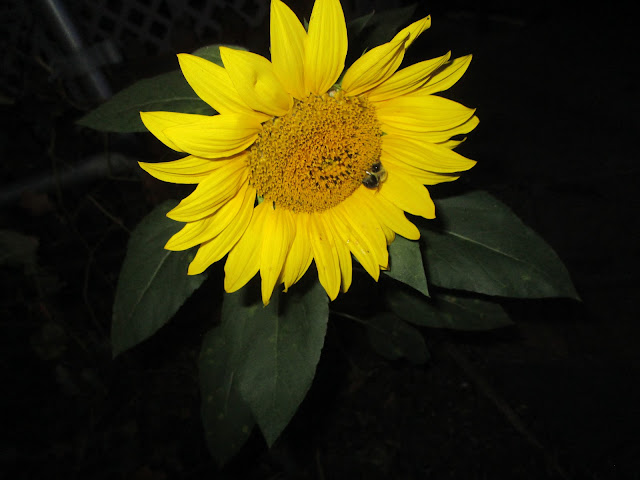 Today was another most beautiful sunny day. I got some work done outside then came in and baked cookies.  I tried a new recipe and they're pretty good. I found the recipe on the internet. It's called Empire Biscuits ( Classic Scottish Iced Cookies with Raspberry Jam).  I always seem to have trouble rolling out the dough so I just made balls of cookie dough and flattened them slightly.  They look rather ragged but since they're only for family and they know my baking often looks less that perfect---
( understatement) they taste very good.  The first picture is before I sandwiched the cookies together with the jam. 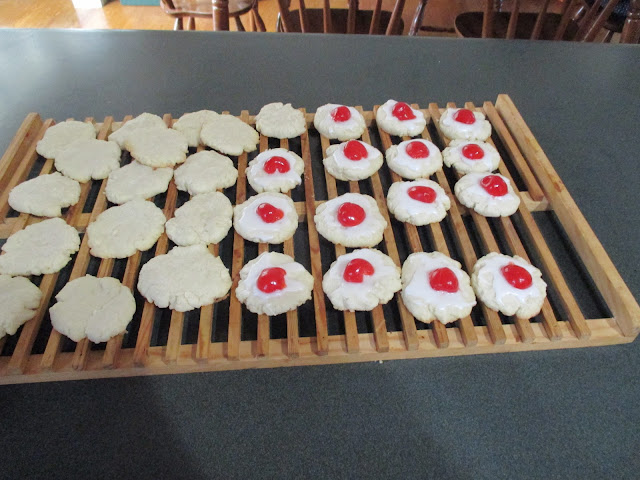 As you can see the recipe doesn't make many cookies but if I had rolled the dough to 1/8 " no doubt it would have made more. 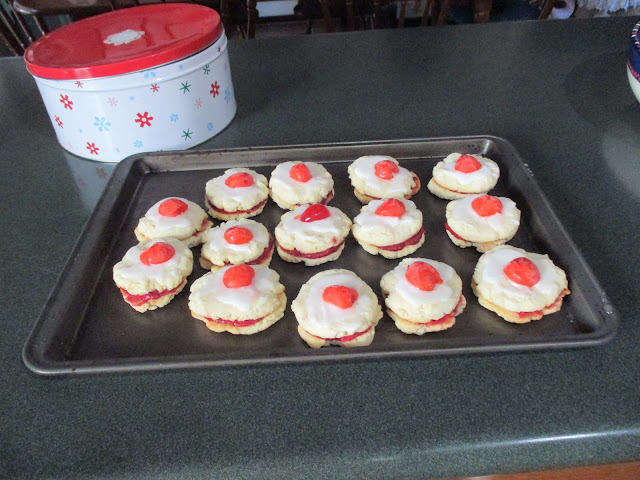 That's my Saturday. It was a good one and I hope yours is/was too.   Thanks for coming by,  GM

Fall clean-up continues. Youngest son came to cut down huge Clematis and kindly put them in his truck to take away.  The bin we have for green stuff would not have been adequate. He cut down the Peony and all the Japanese Anemone which were all done blooming. 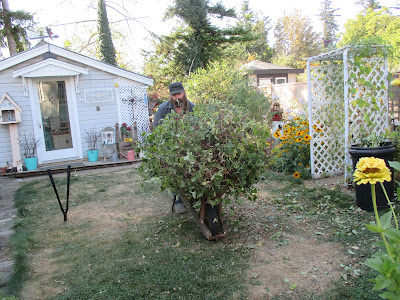 I answered an ad on FB Marketplace. Pumpkins and gourds for sale. The person's front stoop and walkway were so lovely. 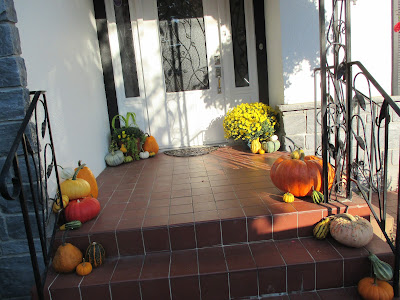 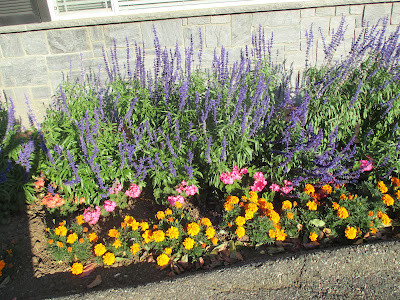 Around the side of the house the pumpkins were laid out and I made my choices. 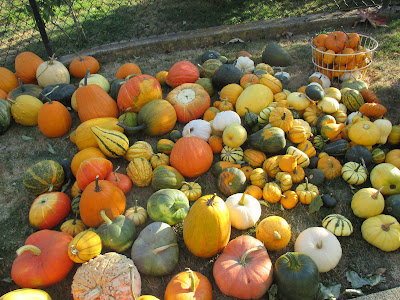 When I put them out Miss Kitty had to investigate. Sorry about the large foot that got into the picture. I took another picture and this time it was grandson M's arm that got in the picture. Oh well. 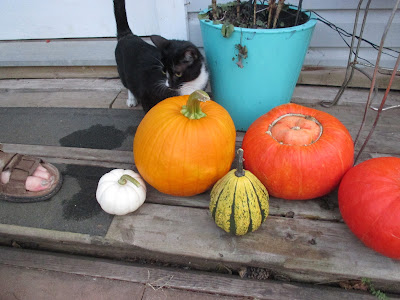 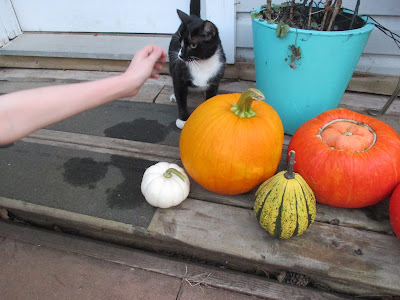 We had the kittens out on the lawn yesterday. I took some pictures and will post them soon.

Thanks for stopping by,.  gM The weather these days is so lovely. When we go walking the dry leaves scrunch under my feet. I know we desperately need rain but I am enjoying the sunshine.  It's quite breezy out today and if I had laundry to hang out it would be dry in no time at all.

We have a number of birthdays in October and I've been keeping my eyes open for gifts. I was at the thrift store this morning and found a nice shirt for one of my sons. $4 and it looks and feels like new. I also bought a king-sized bedsheet in great condition for $3 and I'm sure you know what those go for in any store. It's a nice pale cream, very neutral.

I gathered Marigold seeds, enough for years! Maybe I can find someone next spring that wants some. I'm still waiting for the zinnias to form seeds. Each flower just lasts and lasts.

Things are still very quiet around here so I don't have a lot to blog about. 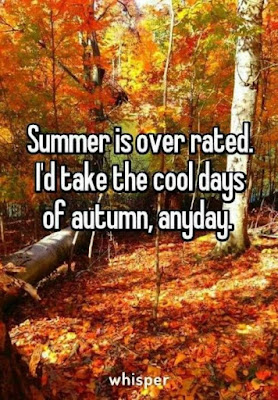 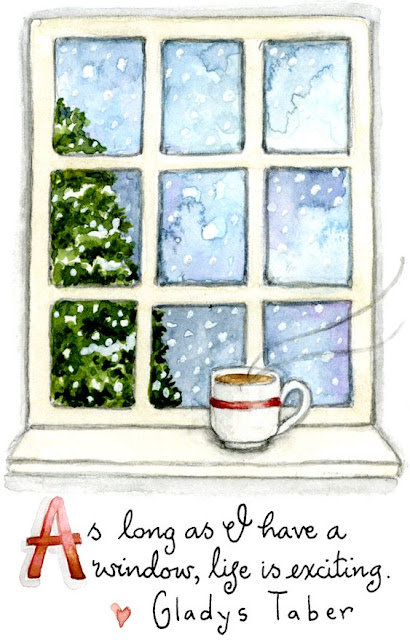 Life may have been exciting for Gladys Taber ( so many of us enjoy her books) but although I have many windows nothing is exciting here. It's amazing how quickly our weather changed from very hot to much cooler. We went down to single digit temperatures last night. Celsius, of course.

I've continued with tidying drawers and cupboards. I baked bread yesterday. Made lovely Butternut Squash soup. I'm sure glad DH peeled and chopped that squash. It sure was hard.

The kittens are growing. Neighbours who live across the street recently lost one of their cats and came to look at the kittens this morning. They said they'd like one. That means homes for 2 now. Three to go unless we keep one.

I wonder if anything exciting is happening around your homes. Let me know in the comments.
Meanwhile I'm going to sit on the porch and enjoy this Autumn day.  GM

It's Thursday and the week is almost over. My but it went by fast!!  My back is still stiff and sore but I've been taking it easy. Thank you for your sweet comments. I honestly try to be careful but I seem to forget and then these things happen.

One of the little jobs I took care of was putting the Spring Teddy Bears back into the box under the bed while taking out the Fall Bears from the same. 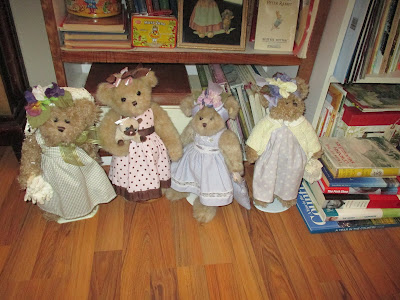 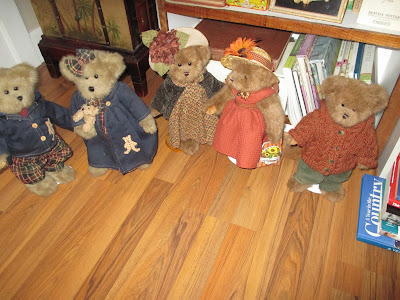 Miss Kitty is very helpful when I putter outside. I was in my garden shed where I store a lot of my things and she tried to be useful. 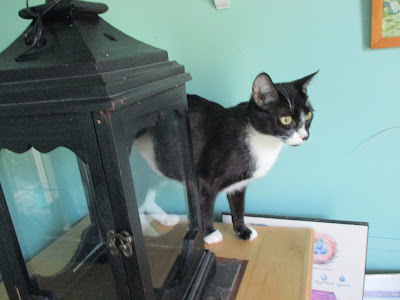 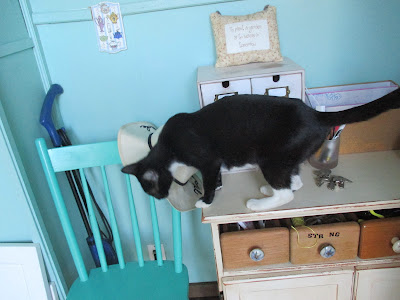 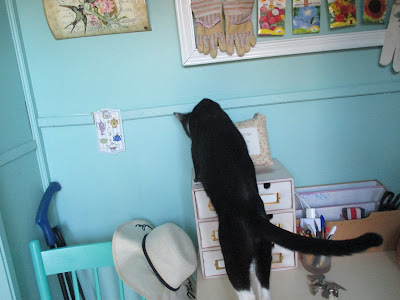 She gave us a big scare a few days ago when her kittens suddenly disappeared.  We knew that mother cats sometimes hide their kittens but never dreamed that ours would.  DH went around to the neighbours and asked them to be on the look-out. After 24 hours she was discovered in a neighbour's garden shed well hidden in a corner. If that neighbour hadn't heard the tiny meows he would not of known they were there.  For now the kittens and Miss Kitty are being very closely monitored.
Tomorrow the little ones will be 2 weeks old and their eyes are finally open. Soon I should be able to get some pictures without unduly upsetting the Momma cat.

Thanks for stopping by,  GM

I found a curious zinnia growing with the rather ordinary ones. I don't think I've ever seen one bloom growing right on top of another. Maybe someone else knows or at least has had this happen. 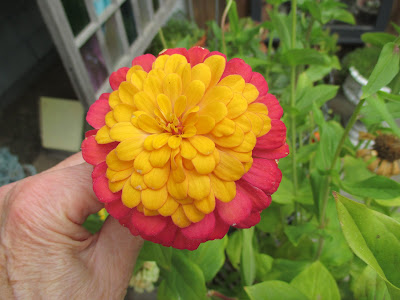 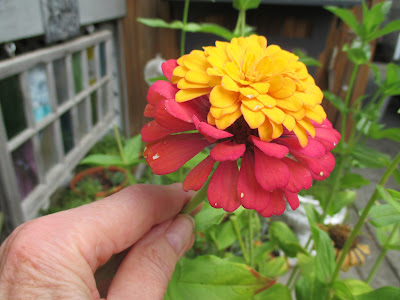 The bees seem to  love the zinnias. 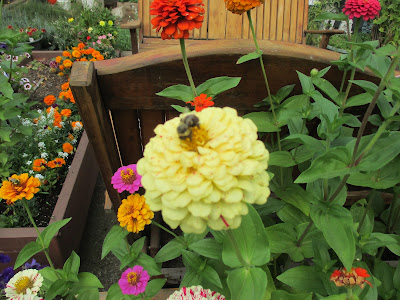 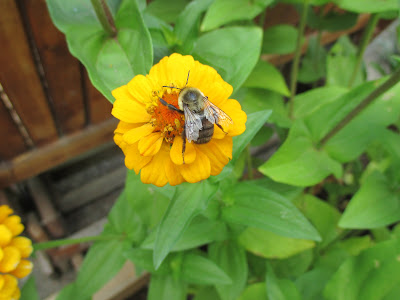 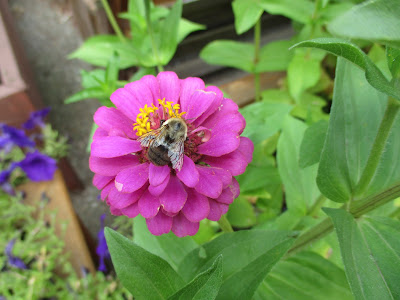 I wanted to show you this lovely bowl which eldest daughter gave me this week. Underneath is written Rio Salado----- hand painted in Spain.  The 'dots' all around the top stand out from the surface. It's too big for a salad bowl but I don't mind having it empty so I can admire the pattern. 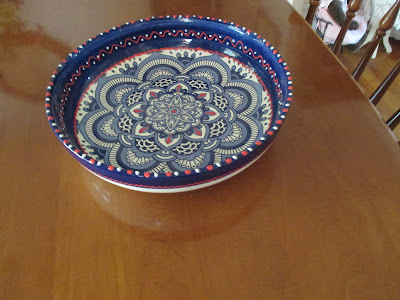 Here's a lovely Autumn picture that I found on the INTERNET. It's not my picture but I think it's lovely. 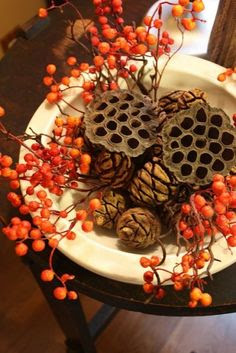 Thanks for popping by,  GM